A member of the far-right faces off with police during a protest against COVID-19 restrictions on January 1, 2021 in Salem, Oregon. (Photo by Nathan Howard/Getty Images)

The arrest of Proud Boys leader Enrique Tarrio by D.C. police Monday is turning up the heat on planned protests this week, with some members threatening to “burn down” a police precinct in the nation’s capital.

Tarrio, who calls himself “chairman” of the far-right street-fighting gang, was arrested by police on his way into the city on Monday afternoon and slapped with a misdemeanor charge for burning Black Lives Matter signs outside a church following a pro-Trump protest in November. During his arrest, police discovered two high-capacity firearm magazines in Tarrio’s possession (which are illegal in D.C.), earning him two additional felony counts, the Washington Post reported.

His arrest came just days before he and thousands of Trump supporters are expected to descend on D.C. in an effort to disrupt the official count of Electoral College votes that will certify Joe Biden as the winner of the 2020 election—and President Trump as the loser.

Now, ahead of Wednesday’s events, Tarrio’s supporters and ardent Trump fans are putting the DC Police Department in their crosshairs, setting an ominous tone for the protests, which many fear will become violent.

“Time to burn down dc police precinct,” one person wrote on Parler, a social media platform popular with right-wingers. “Fuck those treasonous pig bastards.” One prominent Proud Boys member, Jeremy Bertino, even claimed on Parler that D.C. police and the National Guard were conspiring with counterprotesters. “Don’t trust the police or NG to protect you, they have been compromised,” Bertino, who uses the alias “NobleBeard,” wrote. “The enemy is showing their hand. The police will be arresting patriots who participate in civil disobedience.”

This kind of rhetoric marks a drastic shift in the Proud Boys and MAGA-world’s usually firm pro-police stance. President Trump made “law and order” a centerpiece of his failed 2020 re-election bid, which helped galvanize a newly energized pro-police “Back the Blue” movement. Under that narrative, and amid nationwide civil rights protests last summer, Trump supporters viewed themselves as good, law-abiding citizens who respected the police—as opposed to the unruly left-wing mob, like “antifa” or even Black Lives Matter.

The Proud Boys and other right-wing groups have styled themselves as allies of police, and at times even fancied themselves as backup law enforcement during protests. Blue Lives Matter or ”Back the Blue” flags have also been a mainstay of MAGA rallies, and much of Trump’s base includes police unions and law enforcement.

But lately, the fabric of “Back the Blue” has started to unravel. Hardcore Trump supporters, trapped in a misguided fantasy that their MAGA-hero was the true winner of the 2020 election, have begun turning their back on anyone who isn’t willing to get onboard with their efforts to overturn the results. And in some cases, this has included the cops—opening up the possibility for a potentially dangerous new protest dynamic, one that could play out on the streets of Washington on Wednesday.

Tensions between MAGA and law enforcement have been simmering online and offline in recent weeks, starting Dec. 21 in Salem, Oregon. As legislators gathered inside the state Capitol for an emergency session to discuss COVID-19 economic relief measures, anti-lockdown protesters—many armed with AR-style weapons—attempted to storm the building.

Though some at that Salem protest were carrying Back the Blue flags, the crowd quickly became hostile toward police who were wearing riot gear and preventing them from making their way further into the building. Police said protesters used bear mace on cops at least twice. They also smashed windows, and angrily faced off with law enforcement.

“Fuck you, you pieces of shit,” one protester shouted at the police during a standoff caught on video. Others chanted “Stand down.” “You aren’t Americans. You’re fucking working for the Chi-Coms,” another shouted—a reference to conspiracy theories that the Chinese government has infiltrated U.S. government agencies. Police made at least four arrests and used pepper balls on the crowd.

On New Year’s Day, Salem once again saw standoffs between right-wing protesters and police. Salem Police said that right-wing protesters, including Proud Boys, were armed with “various weapons, knives, chemical sprays, batons, and firearms” and refused to disperse when ordered. Police said that their goal was to keep them apart from a dueling antifascist protest nearby (which also included armed participants), and tensions flared when they prevented the Proud Boys from clashing with counterprotesters.

The two events in Salem, and now Tarrio’s arrest, have sparked chatter about police—and their loyalties—on fringe sites popular with the far-right, militia types and pro-Trumpers.

“The police aren’t our friends or allies. They’re allies to the state,” one person wrote on the forum MyMilitia, which caters to anti-government extremists. “Don’t let any of your cop friends or family know what you may be planning to do. They will betray you.”

Another explained that he used to be pro-police, but the COVID-19 pandemic gave him second thoughts. “Who has been enforcing the unlawful edicts against small business who dare defy the unconstitutional orders to remain shuttered?” he wrote. “Nobody is holding a gun to the cops’ heads and telling them to go about enforcing these orders. They’ll do whatever their overlords tell them.

“COPS are attacking patriots and protecting armed BLM” one person wrote in TheDonald, a pro-Trump online hub, in response to the events in Salem.” “Next time someone shoots a cop I’m buying everyone a beer,” someone else commented.

“Are cops just antifa and BLM in taxpayer provided uniform?” another asked on TheDonald, a pro-Trump online hub. “In Dem cities, yes,” someone replied.

“Burn D.C. to the ground. Start with metro police HQ,” one person wrote in Parler after Tarrio’s arrest. “Once a cop violates the oath he took, he loses any protections that oath provided. Fair game.”

DISCLOSURE: Gavin McInnes was a co-founder of VICE. He left the company in 2008 and has had no involvement since then. He later founded the Proud Boys in 2016. 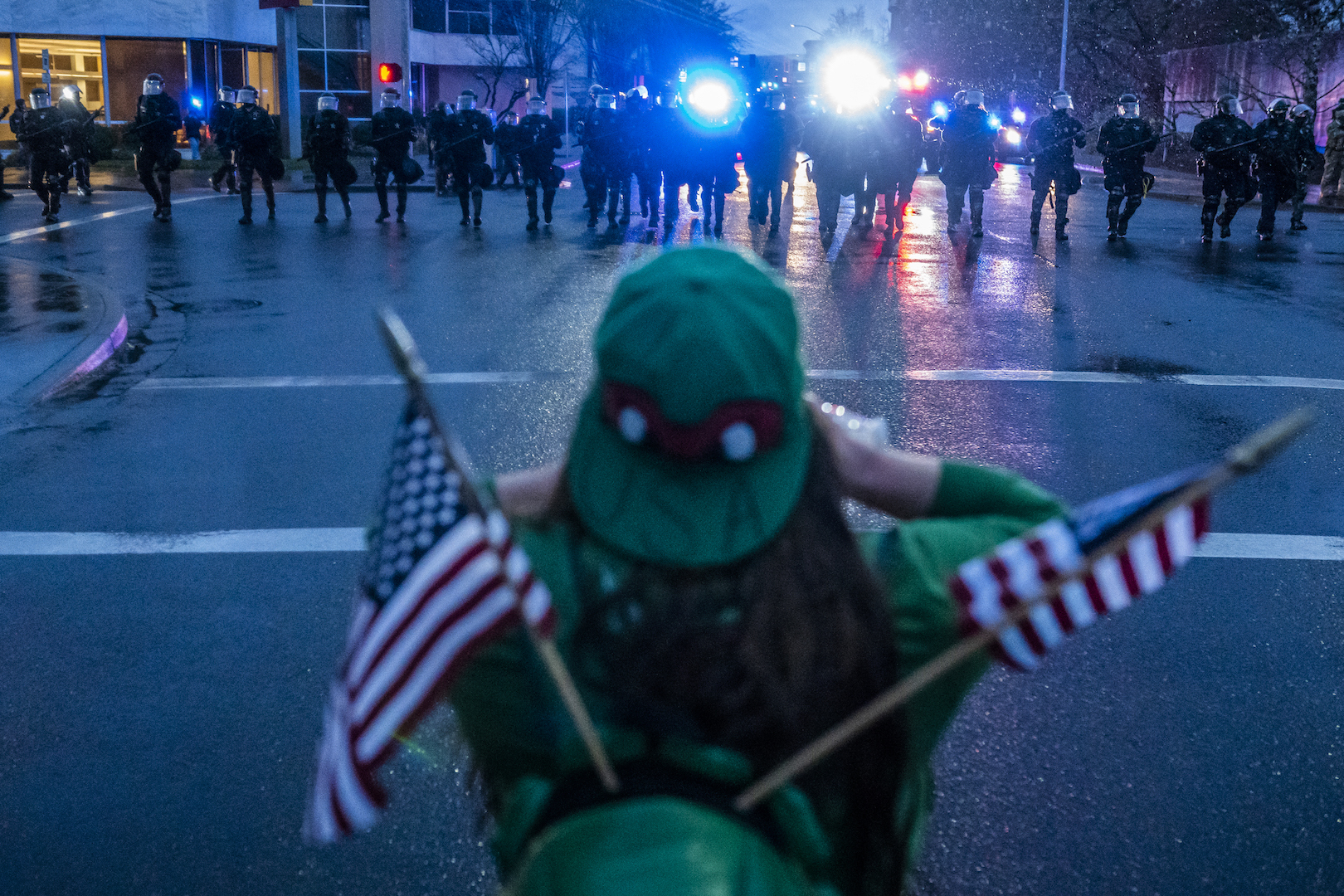 Mental health and scams: ‘I’d have paid anything to make me feel better’