When Dr. Carrie Madej took the stage at the MAGA Freedom Rally D.C. on Wednesday, police sirens wailed as pro-Trump rioters stormed the Capitol. The president’s guest speaker told the crowd, a mix of QAnon supporters and far-right MAGA fans, her thoughts on the COVID vaccine: that it contains bio-sensing nanomachines designed to alter human DNA and control people’s minds.

“This is not your normal flu vaccine,” Madej said. “This is something totally different. This is a witches’ brew. I’ve never seen anything like this in science or medicine.”

“There’s many ways it can be taken up into our genome,” she continued. “So when this gets into the genome, if it’s permanent, guess what? You, as a human, can be patented and owned—look it up!”

Madej describes herself as an osteopathic doctor and a “child of God and a believer in Jesus Christ.” She’s also a QAnon believer who questions why COVID-19 has been a bigger story than what she describes as a “global elite pedophile ring” and reposts byzantine diagrams supposedly revealing Bill Gates as the mastermind behind the global pandemic.

This past summer, she was convinced that a long-debunked website advertising the “Cannibal Club” restaurant in Los Angeles was in fact a real eatery serving human flesh. “We ‘taste like pork,’” she tweeted. “Dear God—help us change this world for the better!”

To many, Madej successfully passes herself off as a medical expert, but she operates at the intersection of QAnon conspiracy theories and anti-vaxxer science, with a dollop of Christian fundamentalism and Trump-worship added to the mix. Yet the unfounded ideas she promotes—that coronavirus vaccines are part of a global effort to change the human genome and control the population—are spreading and have already had an effect. Last month, a pharmacist attempted to destroy 500 doses of Moderna’s COVID vaccines because he believed they were going to change people’s DNA.

“This is not your normal flu vaccine. This is something totally different. This is a witches’ brew. I’ve never seen anything like this in science or medicine.”

The specter of DNA-altering vaccines didn’t originate with Madej, but she’s helped popularize it to the extent that it’s now just taken as a given in many right-wing spheres, without the need for citation or proof. While Madej has been banned from YouTube, she still has tens of thousands of followers across other social media, like Twitter, Instagram, and Parler. And thousands more heard her unfounded conspiracies on Wednesday when she spoke as a featured guest at the Freedom Rally, alongside the president and several other big names on Team Trump.

“Guys, listen, that is the ulterior motive, that is one of the agendas of this: the ultimate enslavement of humanity,” she said, “Wake up! Wake up! Do your due diligence. Look this up. This is real.”

Needless to say, the idea that a coronavirus vaccine contains spying, mind-controlling nanomachines has been debunked. “They do not affect or interact with our DNA in any way,” the CDC writes, in no uncertain terms, about the shots.

Madej says she started studying vaccines as a teenager, when she first came to doubt the tetanus vaccine. (She claims to be unable to find anyone who ever actually died from tetanus.) After earning her doctorate of osteopathic medicine from the Kansas City University of Medical Biosciences, she went on to practice in Georgia.

She currently lives in the Dominican Republic, she says, because it’s not safe for whistleblowers like her in the United States—her long-standing skepticism about vaccines, after all, is dangerous knowledge when elites are pushing coronavirus vaccinations for their own agenda.

Madej first began sounding the alarm about supposed gene-altering vaccines in June on YouTube. The site eventually pulled her video for being misleading and blocked her account, but you can still easily find her video titled “Human 2.0 Warning – Doctor Issues Wake Up Call to the World.”

Wearing a labcoat and a cross around her neck, Madej appears as a talking head on a soft blue backdrop. Over the course of 20 minutes, she focuses on Moderna’s vaccine, which uses messenger ribonucleic acid, or mRNA, to produce an immune response in humans. Although they’ve been researched for decades, COVID-19 vaccines are the first mRNA vaccines approved by the FDA.

Most people are familiar with injecting a piece of weakened or inactivated germ into the body for inoculation, like the flu vaccine. The COVID vaccines work differently: They contain a piece of the coronavirus mRNA that, once inside the body, provokes cells to produce a distinctive (but harmless) part of the virus—a “spike” protein. The immune system, in turn, learns to defend against this protein, thereby creating antibodies that can protect from actual COVID infection.

Madej claims that process changes a recipient’s DNA, making them a genetically modified organism that’s subject to patent law. Further, she contends, the vaccines use nanotechnology—a word that simply describes extremely small tools but is often associated with tiny computers. Those tiny computers, she claims, can be used to both monitor everything happening inside our bodies and possibly remote-control our thoughts and emotions.

Although the COVID vaccines do use nanotechnology, it’s not computers—it’s simply extremely small droplets that carry the mRNA into the body. There’s no massive DNA reprogramming and nanobot-insertion program designed as a part of a transhumanist push to “Human 2.0.”

Nevertheless, Madej’s story found an audience—and continues to. As of late July, her YouTube video had 300,000 views, according to BBC, and archives suggest her videos were still available under her name on the platform in late August, with tens of thousands of subscribers and millions of views. Even now, supporters try to sneak her videos past YouTube’s safeguards.

The idea that the COVID vaccine will alter a recipient’s DNA even recently led to criminal charges. Last month, Steven Brandenburg, a 46-year-old pharmacist from Grafton, Wisconsin, attempted to destroy more than 500 doses of coronavirus vaccine because he reportedly thought “it could hurt people by changing their DNA,” according to the detective who took his probable cause statement. It’s unclear whether Brandenburg was directly exposed to Madej’s content, but it doesn’t matter—her ideas are in the ether now, carried on the winds of right-wing social platforms and media.

Since being banned from YouTube, Madej has made her home on BitChute, where she has more than 2,000 subscribers. She’s on Parler, too, with 2,800 followers; she follows lawyer and Trump conspiracist Lin Wood, the Daily Caller, Breitbart, Ron and Rand Paul, and Bongino Report. And on Twitter, she emphasizes her medical credentials (her Twitter handle is @DrMadej and her avatar features her with a stethoscope around her neck) while encouraging her more than 26,000 followers to resist vaccination.

“Our genome should not be played with like a Fisher-Price playset,” she tweeted on Tuesday. “Say No to being in these dangerous experiments. Say No to the Va$$i&e.”

Her Instagram account with 6,500 followers is a constant feed of vaccine conspiracy theories.  Alongside one meme showing The Munsters, with one “normal,” smiling blonde family member, is the caption, “That one family member who refused the vaccine.” She also once posted a screenshot of the CDC’s tongue-in-cheek guide to zombie preparedness and asked with no apparent irony, “Why is this on the CDC website?”

Of course, Madej has chatted with Alex Jones, still the semi-tarnished king of conspiracy mongering, and he opened his interview by saluting her for her courage. Farther afield, she’s appeared on the podcast of anti-vaxxer Robyn Openshaw. She joined Christian preacher Bradlee Dean, whom Popular Information calls a “‘super-spreader’ of health misinformation,” on Facebook Live, likely violating any number of Facebook rules while telling viewers that the coronavirus vaccine is also causing HIV. Bradlee Dean has almost 800,000 followers.

Madej is also a mutual Twitter follower of Dr. Sherri Tenpenny, the radical anti-vaxxer who has called out the impending transhumanist plot, saying Bill Gates is behind it all and is working toward blocking out the sun. Dr. Ben Tapper similarly trades on his medical authority, while telling his 15 thousand Twitter followers that the vaccine will change their DNA.

In other words, the belief in gene-altering, nanobot-spying, mind-controlling vaccines is now bigger than Madej, one of its earliest, most persuasive, and prominent proponents. And with people like her stoking paranoia, next time it might not be the Capitol that’s besieged by angry MAGA-hat wearing believers—but a stockpile of life-saving vaccines instead. 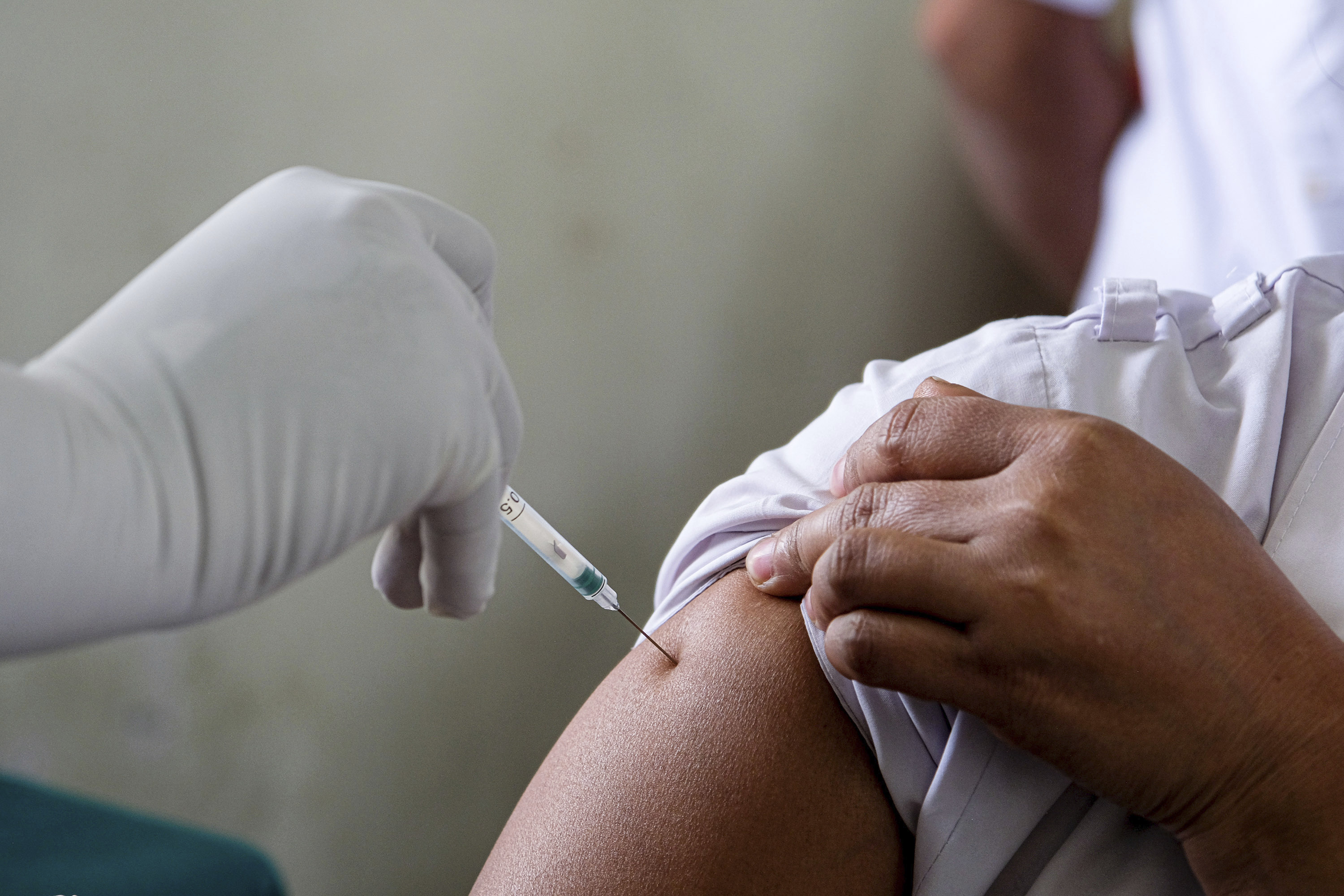 Tesla to join key share index as it defies critics

Trade talks: Why chicken, cheese, and cod are a tricky menu

What Are the Health Benefits of Running