Pro-Trump rioters broke windows and breached the Capitol building in an attempt to overthrow the results of the 2020 election. (Photo by Lev Radin/Pacific Press/LightRocket via Getty Images)

President-elect Joe Biden plans to be sworn into office on the West Front steps of the U.S. Capitol, the very spot where a violent mob of rioters loyal to President Trump overpowered police and breached the building on Wednesday.

That’s led to a growing concern about whether he’ll be kept safe—though national security experts and those involved in planning the complex event insist that ample forces will be present to protect Biden and everyone else at the inauguration.

In the wake of the bloody insurrection following Trump’s rally on the Mall, a bleak scenario has become a distinct possiblity: Pro-Trump militias disrupt the inauguration, as they plan to do, and Trump attempts to help them by ordering officers and troops to stand down and stop protecting Biden. Trump has refused to congratulate Biden on his win, and after finally offering a half-hearted concession on Thursday night returned to inciteful rhetoric on Friday.

Multiple current and former members of the government said that they’re confident that those in the chain of command would obey their Constitutional oaths—and in the case of the Secret Service, their legally bound duty to their protectees—rather than take a direct order from an outgoing president.

“I would expect people at various levels of the chain of command to decline an order to abdicate the responsibilities they have under law,” former Department of Homeland Security Secretary Michael Chertoff  told VICE News. He was George W. Bush’s outgoing deputy and led the inauguration security efforts when President Obama was sworn into office.

Tim Gallagher, a former head of the FBI’s Washington field office who helped plan security for the 2012 inauguration, said he couldn’t discount the possibility that Trump’s most extreme supporters might try to stop Biden’s inauguration by force, or that Trump might support their efforts.

“If you asked me this question six months ago I’d say that would never happen—but I’ve learned not to say that anymore,” he said.

Gallagher expected that law enforcement and military officers would disobey any orders from Trump to stop protecting Biden. But he admitted that it relied on their own consciences—not a clear force of law—to prevent disaster.

“If they’re told to stand down their allegiance is to the constitution, not an individual, and you don’t follow orders that are immoral, illegal or unethical. It’d be a constitutional crisis but at that point what needs to be done on the ground would be done regardless of what someone who has hours to go in office says,” he told VICE News. “It exposes another level of how fragile our democracy is that things are done because people do the right thing.”

A seven-foot metal fence has now been erected around the Capitol, a move that had already been planned for the inauguration but was done early after Wednesday’s siege. And security officials are unsurprisingly reticent in discussing their plans, to protect operation security. But the bloody chaos within the U.S. Capitol on Wednesday appears not to have changed plans for the inauguration. In fact, Biden and other officials involved seem resolute that they’ll hold the inaugural ceremony on the Capitol steps, the traditional spot, to show that democracy prevailed over the violent mob.

“Yesterday was a sad and solemn day for our country. The outrageous attack on the Capitol, however, will not stop us from affirming to Americans—and the world—that our democracy endures,” Missouri GOP Sen. Roy Blunt and Minnesota Democratic Sen. Amy Klobuchar, the chairs of The Joint Congressional Committee on Inaugural Ceremonies, said in a Thursday statement. “We will be swearing in President-elect Biden and Vice President-elect Harris on the West Front of the U.S. Capitol on January 20, 2021.”

Biden said Wednesday that he’s “not concerned about my safety, security, or the inauguration.”

Experts have legitimate concerns but believe security services will be ready after this week’s events even if Trump himself tries to undercut their preparations.

Chertoff said in the worst-case scenario that Trump managed to disrupt security protections for Biden on Inauguration Day as militias roamed the streets, he expected Secret Service would protect him by moving him to a secure location—and he thought Biden would be able to assert control.

“Even if Donald Trump was able to somehow really scale back on security, what could happen is the incoming president could take the oath inside in a secure area, and the minute the oath was taken could call up the director of Secret Service and direct him to do his job.”

“The Secret Service protecting Joe Biden, sworn to protect him, are not going to stand down protection over him,” one former Secret Service agent told VICE News.

Unlike Wednesday’s chaos, where Capitol Hill police were clearly unprepared for a major event and badly outnumbered by the pro-Trump mob, the inauguration is an officially designated “National Security Special Event” involving meticulous planning and massive security operation with thousands of police, intelligence and military officials.

The Secret Service is in charge of the complex planning and execution of security around the day’s events, under the auspices of the Department of Homeland Security. Multiple agencies are involved in the preparation, intelligence-gathering and day-of protection duties: the F.B.I., U.S. Capitol Police, District of Columbia Metropolitan Police, the U.S. Park Police and the Washington, D.C., Maryland, and Virginia National Guards. In total, many thousands of people are involved in inauguration security.

Secret Service officials vowed that the event will go smoothly.

“The inauguration of the President of the United States is a foundational element of our democracy. The safety and security of all those participating in the 59th Presidential Inauguration is of the utmost importance,” the Secret Service said in a statement. “For well over a year, the U.S. Secret Service, along with our NSSE partners, has been working tirelessly to anticipate and prepare for all possible contingencies at every level to ensure a safe and secure Inauguration Day.”

The officials running the massive security operation are nearly exclusively career public servants rather than Trump appointees, sources familiar with the planning told VICE News. Two Secret Service officers told VICE News that the specific operation is being run by the Dignitary Protection Division, which is responsible for ensuring the safety of key officials outside of the administration.

It’s clear that Biden’s team has paid attention to which officers are protecting him. Two weeks ago, the Secret Service agreed to swap out officers in his personal protective detail that Biden’s team worried were politically aligned with Trump with officers who Biden knew personally from his time as vice president.

“We are confident in our security partners who have spent months planning and preparing for the inauguration, and we are continuing to work with them to ensure the utmost safety and security of the president-elect, vice president-elect, participants, and the public during this historic event,” a Biden inaugural committee spokesman told VICE News in a statement. “We are looking forward to the inaugural ceremonies, in which the American people and the world will witness a peaceful transition of power.”

Biden’s team was already planning a scaled-back inauguration because of the coronavirus and has encouraged his supporters not to attend the ceremony in-person. The traditional inaugural parade has been canceled, with plans instead for Biden and Harris to walk a short distance with some military leaders. That might make for an easier security situation—officers won’t have to worry about bad actors in a crowd of hundreds of thousands or more people, as in the past.

Chertoff wasn’t that concerned about the inauguration itself. But he warned that government officials would need to remain vigilant long afterwards for right-wing extremist danger.

“In the months to come Washington will be the periodic stomping ground for bad actors to create mayhem,” he said. “I don’t assume that Trump is just going to go away.” 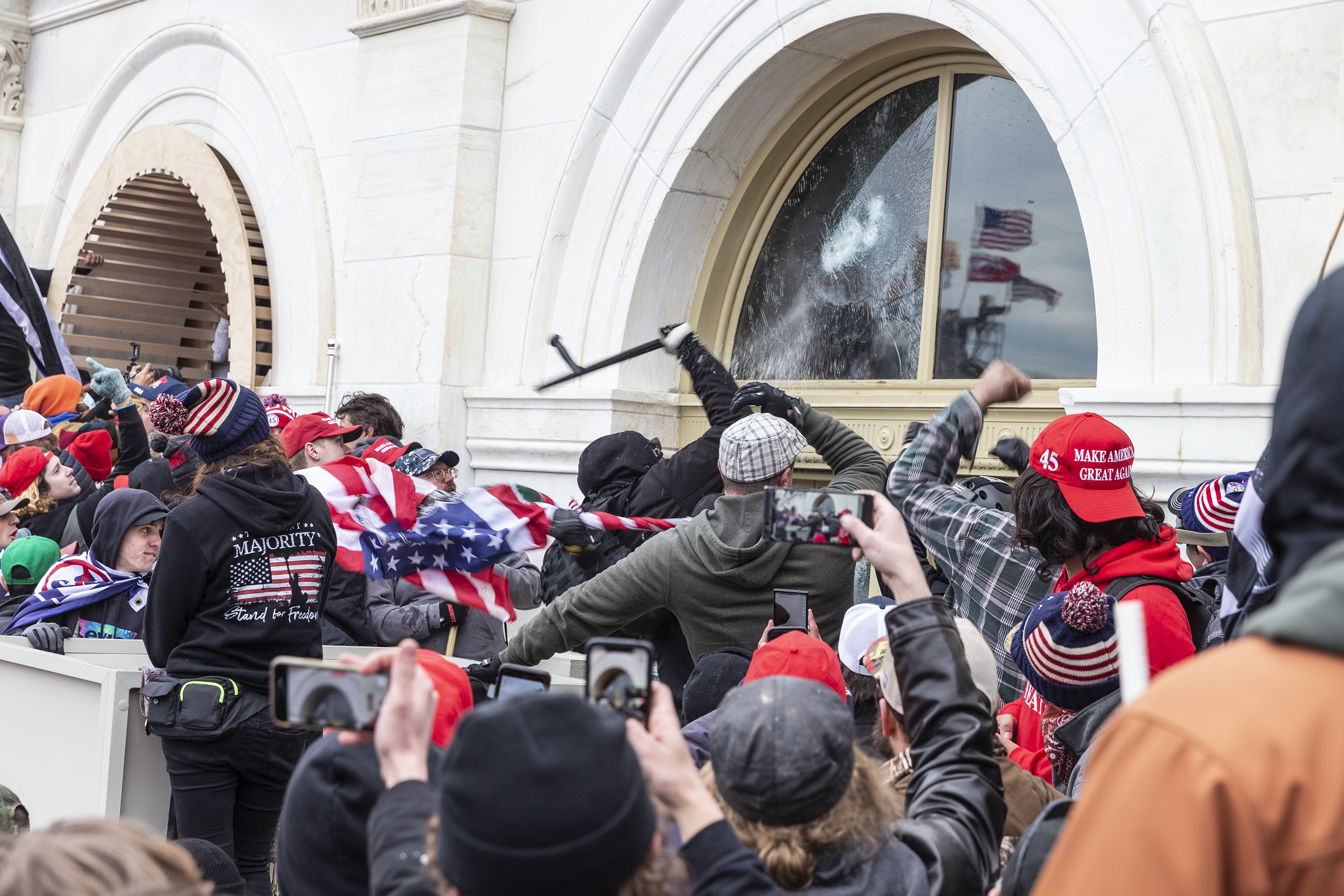 How to Choose the Perfect CrossFit Gear and Clothing