A demonstrator holds a “Q” sign outside the U.S. Capitol in Washington, D.C., U.S., on Wednesday, Jan. 6, 2021. (Photographer: Stefani Reynolds/Bloomberg via Getty Images)

National Guard troops have been deployed, Congressional warnings have been issued, and hotel prices have been jacked up. But a predicted QAnon celebration to mark the return of former President Donald Trump to the White House next week is now being labeled by influencers within the conspiracy movement as a disinformation campaign by the fake news media.

For weeks, QAnon followers have been hyping March 4 as the date when Trump would return as the rightful president of the U.S. But in the last couple of days, virtually all the major QAnon figures and influencers have reversed course and dismissed the date, calling it a false flag event created entirely by the mainstream media to “make the whole movement look dumb.”

“There is a schism within the community, a splintering over what this March 4 date really means” Karim Zidan, an investigative journalist for Right Wing Watch, an advocacy group tracking extremist groups, told VICE News.

Zidan says he has observed major QAnon accounts sharing almost verbatim messages warning followers to essentially ignore the March 4 date, as there is no evidence to back up claims that Trump will return as president.

High-profile influencers and grifters have been controlling QAnon for a while, particularly since the movement’s anonymous leader, “Q,” stopped posting updates in December after Joe Biden won the presidential election. Now, these accounts are keen to preserve their power within the conspiracy movement, and to try and avoid the type of anger and hostility that erupted after President Joe Biden was inaugurated on Jan. 20.  Inauguration day had previously been seen by the conspiracy movement as a red line for when Trump would take action against the global sex trafficking ring that QAnon falsely believes is being run by Democrats and Hollywood elite.

But despite popular QAnon accounts trying to dampen expectations about the second coming of Trump, experts are warning that some followers will take things into their own hands after March 4.

“What I’m worried about is that if nothing occurs that could mean they go even deeper, they could get a bit more extreme,” Jordan Wildon, a researcher who tracks far-right extremists, told VICE News.

In the wake of Biden’s inauguration, when QAnon’s prediction of a last-minute intervention that would see Trump return to the White House didn’t happen, there was much weeping and gnashing of teeth inside QAnon channels on platforms like Gab and Telegram, and on message boards like GreatAwakening.

For a brief moment, it looked like QAnon could be on the way out as followers threw up their arms and declared that Trump’s failure to stop Biden from entering the White House was the last straw, and they were done with the cult.

But that anxiety passed quickly, and was replaced with a new certainty that Trump would ascend to the presidency once again on March 4.

The March 4 conspiracy is something that emerged in the days after Biden’s inauguration from an unholy merging of QAnon with the sovereign citizen movement, a group who believes they are not subject to the same laws as everyone else.

QAnon supporters picked March 4 because this was the original date of U.S. presidential inaugurations. That changed in 1933 to shorten the lame-duck period of outgoing presidents. They then combined this information with another core sovereign citizens’ belief, based on a misreading of a 150-year-old law, that the U.S. ceased to be a republic and was incorporated as a business in 1871. As a result, some QAnon followers believe Trump will return on March 4 to become the 19th president of the original and “real” United States.

For weeks, the March 4 deadline was used as a way of stabilizing the QAnon community in the wake of Trump’s devastating election loss, and rank-and-file followers eagerly spoke with religious zeal about the date and the “facts” on which the March 4 prediction was based.

Following the central role QAnon played in the Capitol attacks in January, the March 4 chatter was taken seriously at the highest levels of the U.S. government.

“Some of these people have figured out that apparently 75 years ago, the president used to be inaugurated on March 4,” House Armed Services Chairman, Rep. Adam Smith (D-Wash) said at a hearing with defense officials last week. “Now why that’s relevant, God knows. At any rate, now they are thinking maybe we should gather again and storm the Capitol on March 4. That is circulating online.”

The Pentagon said last week that 4,900 National Guard troops will remain in Washington DC through March 12 to support “different missions.”

Trump, never one to miss out on an opportunity to cash in on his most fervent supporters, hiked the rates at his Trump International Hotel in DC by $1,000 for March 3 and 4 in case any of his QAnon fans did make the trip to the capital.

For all the chatter, however, there has been no sign of organized events being planned, and lots of those pricey rooms at Trump’s DC hotel are still readily available.

“Disinformation researchers, in general, have not seen that many real indications that there are going to any clear real-world events,” Wildon said. “It does seem to be chatter about ‘this thing will happen and we’ll all be saved’ rather than ‘we need to go out and make this happen.’”

QAnon is a big tent that encompasses casual followers who believe in aspects of the conspiracy, as well as more devoted followers who track every development with a fanatical obsession. And Wildon is concerned about how the latter will react to another failed prediction.

While the efforts by Q influencers to dismiss the March 4 date as a media concoction will likely appease some, when March 4 comes and goes without Trump’s return, there will be a group of QAnon believers who might see it as the final straw.

But rather than simply disavowing the movement, they have already been talking about taking things into their own hands, suggesting they don’t fully believe Trump will return on March 4.

A number of QAnon followers on social media channels and message boards have spoken about engaging in “civil war” and “going rogue” in the wake of the March 4 deadline.

“A lot of people have come to expect something big to happen on March 4. I don’t know if I believe that or not since it’s basically just around the corner now. Guess we will see, but there seems to be a lot of people ready to take action if nothing comes out of the 4th,” one member of one of the biggest QAnon Telegram channels wrote this week.

For experts, it’s hard to decipher just how credible these threats are.

Feeld pointed out that other groups who have sought to infiltrate QAnon channels over the past few months could try and leverage more disappointment and turn it into real-world action.

“Many communities that aren’t defined by their QAnon beliefs see an advantage in manipulating the more far-gone conspiracy theorists among them. Between militias, neo-nazi groups, hardcore Trump supporters, Proud Boys and those simply wishing for a 2nd civil war — there are plenty of more organized and dangerous entities currently operating in the same channels as QAnon believers,” Feeld said.

In general, QAnon tends to be less overtly violent than other fringe conspiracy groups in the U.S. right now, but that could change at the urging of other extremist groups.

“All of these factors add fuel to the fire,” Feeld said. “But when it comes to QAnon believers, they are most likely to harm themselves and those around them — a pattern that tends to break mostly when other more organized ideological groups are involved.” 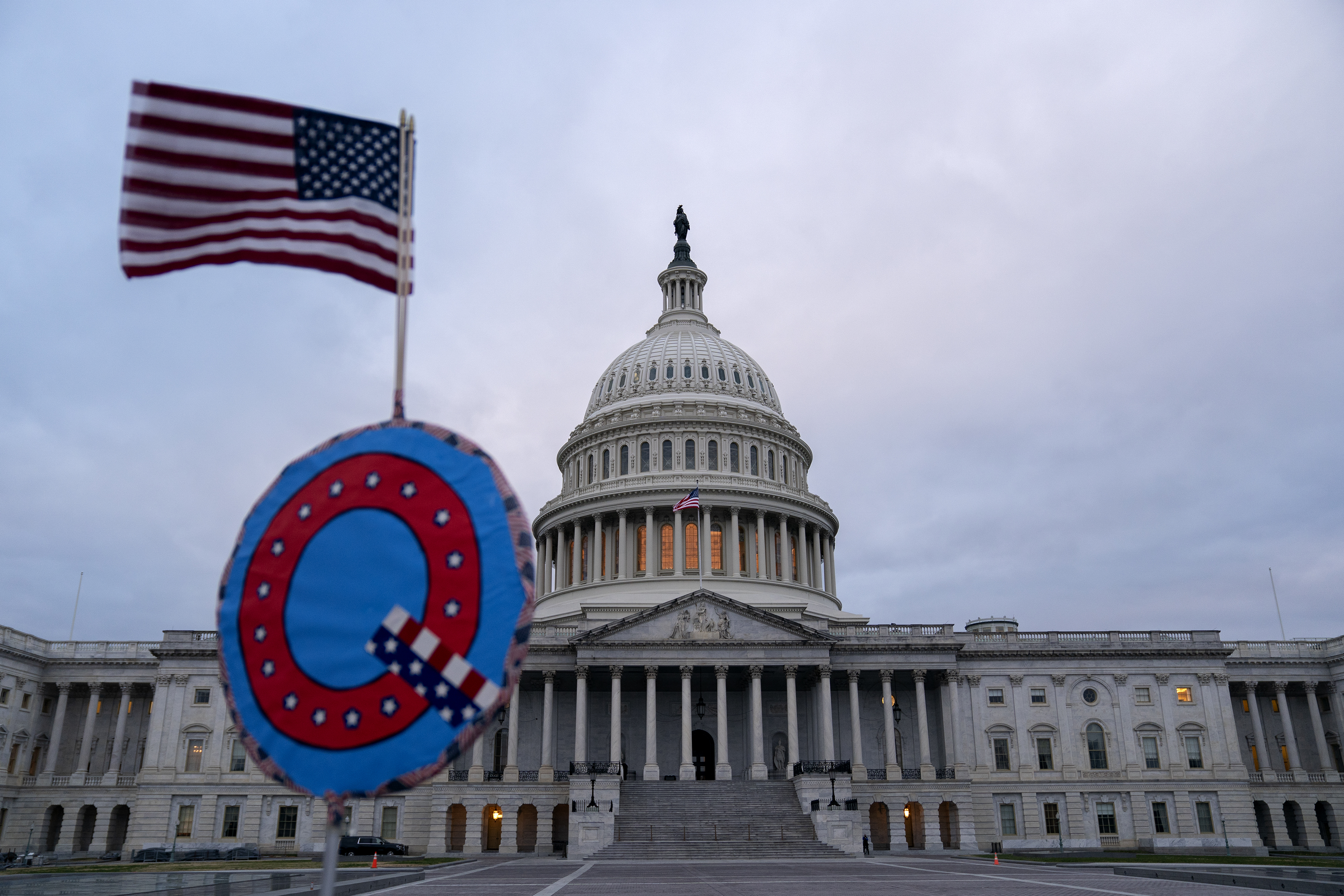 ‘Literally a Lifeline:’ Doctors Without Borders Is Getting Cell Phones to Homeless People so They Can Stay Connected During Coronavirus

User Authentication: Why is it Important in Today’s Technology