Republicans have launched a series of misleading and racially charged attacks against a pair of prominent civil rights leaders in a transparent effort to block Joe Biden’s nominees from top slots in the Justice Department.

Vanita Gupta, an Indian-American woman who is Biden’s nominee for associate attorney general, and Kristen Clarke, a Black woman whom Biden picked to head the DOJ’s Civil Rights Division, have faced increasingly nasty attacks seeking to paint them as cop-hating, anti-Semitic reverse racists.

Republicans have faced heat for seeking to block a number of Biden’s BIPOC female appointees from senior administration posts. But it’s more than that: Their attacks against Gupta and Clarke are aimed at keeping a pair of civil rights veterans from two of the most powerful civil rights positions in the federal government at a time of surging white supremacist violence, a tidal wave of new vote-suppressing GOP state-level legislation, and a GOP legal push to further dismantle the Voting Rights Act that’s made it all the way to the Supreme Court.

“It always comes down to race. And that’s what’s motivating the opposition to these two nominees,” said the Campaign Legal Center’s Gerry Hebert, who has worked with both Gupta and Clarke for years.

“Kristen Clarke and Vanita Gupta are both experts on voting rights, both have served in the DOJ previously, so they don’t have to learn the ropes,” Hebert continued. “If the GOP’s strategy is to try to restrict voting rights as much as possible, then delaying these two nominees from taking office is totally consistent with that. That’s what’s likely motivating the opposition.”

Republicans telegraphed their coming attacks on Gupta and Clarke during the hearings to confirm Merrick Garland as attorney general.

“One need not look very far back into their respective records to find evidence that they are all about politics in the Justice Department,” he said. “Calls to defund the police, as recently as June of last year. Calls to eliminate qualified immunity for law enforcement. All of these should be nonstarters for anyone assuming a position in law enforcement.”

Gupta has never supported defunding the police—her opponents cite a comment from 2019 where she said additional resources should be spent on other priorities rather than hiring more police officers to make that false claim. And Democrats, and some Republicans, support ending qualified immunity, which shields police from repercussions.

Utah GOP Sen. Mike Lee spent five full minutes grilling Garland not on his own remarks but on things he claimed that Gupta and Clarke had said.

That included a selective quote of Gupta that implied she’d called all Republicans bigots when she’d been specifically talking about how if justices didn’t enforce civil and voting rights laws, they could abandon minorities to “the mercy of people and institutions driven by hate, bigotry, and fear of any threat to the status quo.” He then accused Clarke of “anti-Semitic comments,” and claimed that as an adult she declared, as he put it, “that one racial group is superior to another” (she was a teenager and was clearly being sardonic, not literal).

The exchange was highlighted by the conservative Breitbart News:

Lee cited those remarks—and Garland’s refusal to distance himself from them—as a reason he’d changed his mind and decided to vote against Garland’s confirmation.

These GOP attacks follow a well-worn pattern. Gupta was acting head of the DOJ’s civil rights division for three years because Republicans blocked President Obama’s appointment of Debo Adegbile with similar race-baiting attacks that painted him as an anti-police radical. Clarke would be the first woman to be confirmed to her position because Republicans ran the same playbook to block Lani Guinier, President Clinton’s Black, female nominee, in the 1990s.

Gupta’s hearing is first, so has drawn more concentrated fire from conservatives: She’s scheduled for Tuesday, alongside Lisa Monaco, Biden’s nominee for deputy attorney general. Gupta most recently headed The Leadership Conference on Civil and Human Rights, previously was acting head of the DOJ’s Civil Rights Division in the Obama administration, and before that was with the American Civil Liberties Union. That’s given her a long track record of fighting against discrimination and for voting rights and criminal justice reform—positions that some Republicans find anathema.

The conservative Judicial Crisis Network has spent more than $800,000 on ads calling Gupta a “dangerous appointee” who “supports defunding police,” even though that’s not true—she literally said that the opposite, that police reform alone wouldn’t fix all underlying problems and talked up investing in Black and Brown communities. That ad also accuses her of supporting reduced sentences for white supremacists, basing the ludicrous claim on her support for ending the death penalty.

As nasty as the attacks against Gupta are, some Republicans may vote for her. Only five Republican state attorneys general signed onto a letter that called for Biden to rescind Gupta’s nomination on Monday— a number the Judicial Crisis Network said it was “surprised and disappointed” wasn’t higher.

And she has bipartisan support. A group of anti-Trump Republicans including Bill Kristol are running ads that say she “has a record of building bridges across partisan divides.” She also has support from the Americans for Tax Reform’s Grover Norquist, as well as from Mark Holden, the former vice president of Koch Industries, and Michael Chertoff, who was Secretary of Homeland Security under president George W. Bush.

Gupta even has backing from the country’s largest police union, the Fraternal Order of Police, who endorsed President Trump in both of his elections.

“She always worked with us to find common ground even when that seemed impossible. Although in some instances our disagreements remain, her open and candid approach has created a working relationship that is grounded in mutual respect and understanding,” FOP national president Patrick Yoes wrote.

Clarke looks like she may face stiffer opposition from the GOP, though because her nomination is still a ways off it’s unclear exactly how tough that will be. Clarke’s nomination paperwork has yet to be submitted, and the Judiciary Committee typically waits 28 days after that, so she likely won’t get a hearing until April. Democrats also may look to pair her with another nominee—and since there are no other pending nominations to the DOJ, that could further delay her hearing.

Clarke, a DOJ veteran and former head of the New York attorney general’s civil rights bureau, most recently headed the Lawyers’ Committee for Civil Rights Under Law. She has yet to face paid advertising attacks, but it’s clear that conservatives are coming for her, too. And they’ve gone all the way back to college to attack her, skipping right over her quarter-century career to use out-of-context quotes to paint her as anti-Semitic and anti-white.

Fox News’ Tucker Carlson kicked off the attacks with an early January segment tying her to anti-Semitic professor her group invited to campus, and selectively quoting a letter she co-authored that aimed at parodying others’ racist work.

“In a sane country, Kristen Clarke should be under investigation by the Civil Rights Division, not running it,” he said.

The Russian propaganda publication RT called her a “black supremacist.” The New York automate your posting ran a scathing op-ed that accused her of having an “ugly history of hate.”

The attacks come from Clarke’s time as a 19-year-old sophomore. Two conservative Harvard professors had just released a deeply controversial book, The Bell Curve, that used disparate IQ scores to argue Black and Hispanic people were, on average, less intelligent than white and Asian people. The book was a huge success—and made some in Harvard’s Black and Hispanic student body feel like they didn’t belong on campus.

Clarke headed the Harvard Black Students Association, and organized a series of protests.

“A lot of Black students on campus… felt the book was a personal attack on them and their right to be at elite educational institutions,” Joshua Bloodworth, who was on the BSA board with Clarke and remains a friend, told VICE News. “Kristen was wise enough to realize that there were a lot of people because this was being said by Harvard professors who were questioning whether they should even be there, and getting depressed. She wanted to provide a space to refute that.”

The group accepted speaking offers from a pair of Black professors to refute the book. One was Wellesley College’s Tony Martin, who had written a anti-Semitic screed titled “The Jewish Onslaught.” Bloodworth said no one at the BSA knew about Martin’s anti-Semitic views until he arrived on campus.

Clarke defended him after his speech.

“Professor Martin is an intelligent, well-versed Black intellectual who bases his information on indisputable fact,” she said.

In a January interview with The Forward, a liberal Jewish publication, Clarke said it “was a mistake to accept his offer to come and to defend him.”

The quotes that Martin and other conservatives have circulated to argue Clarke is a Black supremacist are simply bad-faith attacks. She wrote an obviously satirical letter mocking the book that included over-the-top pseudoscientific claims like “Melanin endows Blacks with greater mental, physical and spiritual abilities.”

A number of Jewish organizations have defended Clarke, including the Anti-Defamation League, the country’s largest organization that combats anti-Semitism.

“Clarke will bring much needed and well-rounded experience in the defense of civil rights to the position of Assistant Attorney General for Civil Rights,” ADL CEO Jonathan Greenblatt wrote in a late February letter to the Judiciary Committee.

The only recent example conservatives have found to argue Clarke is anti-Semitic is a letter she signed that defended Women’s March head Tamika Mallory when she came under credible accusations of anti-Semitism in 2019. Clarke told The Forward that she did so because of “a grave concern about seeing another woman of color marginalized and silenced.” They haven’t actually found any quotes from Clarke herself to suggest she’s anti-Semitic—just guilt by association.

It’s not certain if the GOP the attacks will work against Clarke—or Gupta. But it’s crystal clear what they’re trying to do. 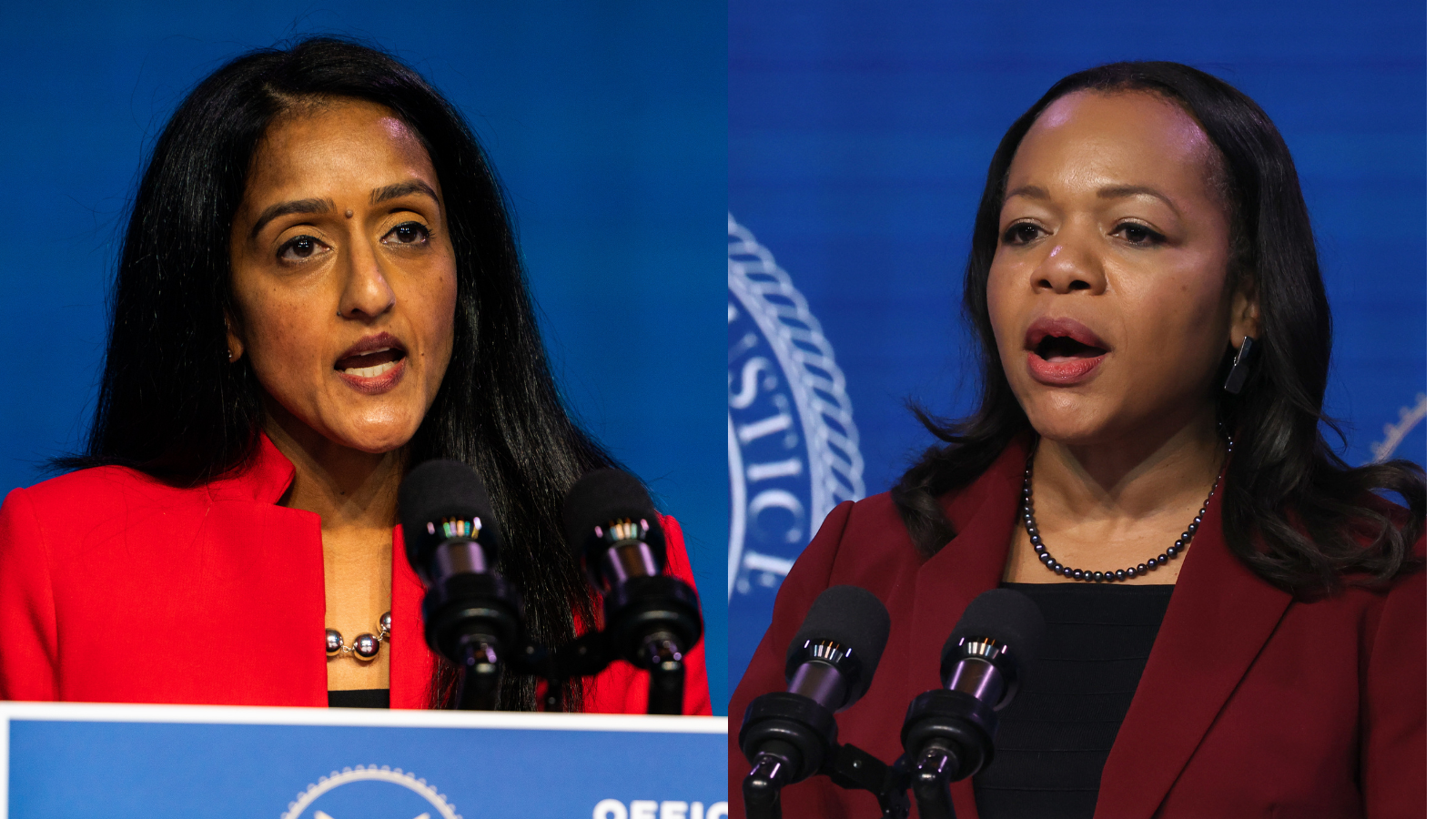