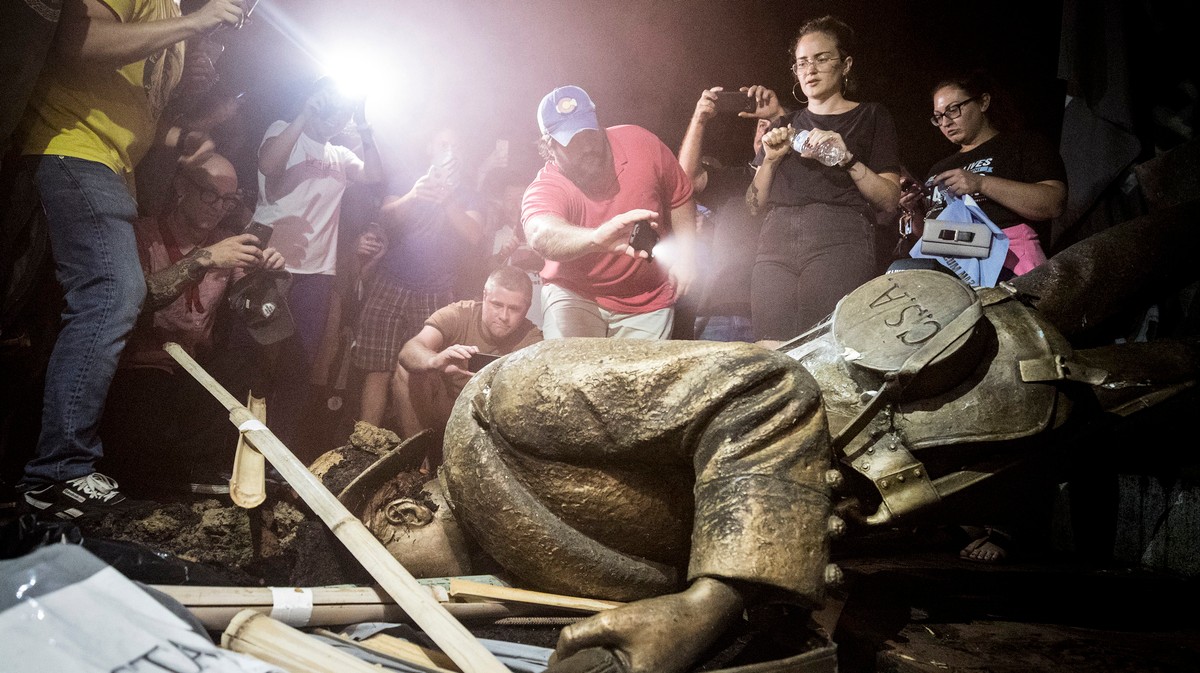 The University of North Carolina is being accused of cancelling another liberal professor who criticized its handling of the infamous “Silent Sam” Confederate monument.

UNC’s Board of Governors reportedly declined to reappoint Eric Muller chair of the board of governors of University of North Carolina Press in May after he spoke out about a plan to build a $2.5 million home for the Silent Sam statue, which was torn down by anti-racist protesters in 2018. The deal, however, was voided last February.

The decision not to reappoint him was allegedly politically motivated, according to a source who spoke to NC Policy Watch. It also came before Muller spoke out against the refusal to offer tenure to Pulitzer-winning New York Times reporter Nikole Hannah-Jones.

“The decision was already made to get rid of him by then, but this is the kind of thing they don’t want someone in that UNC Press role speaking out about,” a source in the UNC system described as close to the appointment process told NC Policy Watch. “Just strip him of that and he’ll either learn to shut up or the next person in that position will think twice about speaking out against them.”

Along with the Hannah-Jones fiasco, it’s another indication of growing efforts to crack down on liberal academia during the conservative backlash to “critical race theory,” a discipline of legal philosophy that’s become a catch-all right-wing bogeyman for efforts to increase diversity and engage with racism in education.

Muller is a professor at UNC-Chapel Hill and a historian whose work includes coverage of the internment of Japanese-Americans during World War II. He’s also served two consecutive five-year terms on the board of University of North Carolina Press, but last month the UNC Board of Governors declined to offer him another term.

In 2019, Muller was one of the most forceful critics at UNC of a settlement between the university and the Sons of Confederate Veterans, a Civil War revisionist group, for the university to build a $2.5 million home for the “Silent Sam” statue.

“There was a lot of anger that there was a prominent UNC law professor talking about the deal with the Sons of Confederate Veterans and saying that it didn’t hold up legally,” the anonymous board member told Policy Watch.

The incident follows the UNC-Chapel Hill Board of Trustees’ denial of tenure to Hannah-Jones, who was up for a tenured professorship as the school’s incoming Knight Chair in Race and Investigative Journalism. Hannah-Jones was instead hired under a fixed five-year contract, a move that broke with precedent and has been denounced by UNC faculty. Hannah-Jones has threatened a lawsuit against the university.

At the New York Times, Hannah-Jones led the Pulitzer-winning “1619 Project,” named for the date of the first arrival of Africans on American soil. But conservatives have taken issue with the project, and former President Donald Trump formed a “1776 Commission” in direct response to the Times, which produced a report downplaying America’s history of slavery shortly before he left office earlier this year.

Earlier this month, the digital outlet The Assembly reported that UNC megadonor Walter Hussman, who is the namesake for UNC-Chapel Hill’s journalism school, voiced concerns about Hannah-Jones to university officials and at least one trustee, although he’s denied pressuring them to refuse Hannah-Jones tenure.

Muller, who also serves on the UNC-Chapel Hill faculty council’s executive committee, has also been an outspoken defender of Hannah-Jones. “I’m not sure any of us has seen the faculty more galvanized with emotion,” he told Inside Higher Ed last month. “I see no reason to hide the fact that we are outraged.”

Hannah-Jones also offered her solidarity to Muller in a Monday tweet. “I’m sorry this has happened to you, and to our great university,” she wrote to Muller.

In Muller’s case, the board of governors’ members are selected by the state Legislature and provide oversight over the entire UNC system. Current board members include conservative megadonor Art Pope, former state budget director Lee Roberts, and former Republican state representative N. Leo Daughtry. The only Democrat on the 24-person board, as NC Policy Watch previously reported, is former state senator Joel Ford, who during his time in the Legislature was a frequent ally of the Legislature’s conservatives on LGBTQ and charter school issues.

The UNC Board of Governors committee overseeing the appointment said they wouldn’t consider the nomination of Muller, the UNC Press board’s chair for the last six years, NC Policy Watch reported. When the vice chair of the UNC Press board wrote university system President Peter Hans to ask why Muller wasn’t considered for another term—though the nominations of two others moved forward without incident—the university’s general counsel, Andrew Tripp, reportedly declined to “speculate” on why the board “chooses to act on a particular group of nominations,” according to Inside Higher Ed.

David Powers, the chair of the committee in question and one of three registered lobbyists on the board, said the board wanted to “change the membership on some of these boards more frequently,” according to an email obtained by Policy Watch. But another member of the board who was reappointed was also up for a third term, like Muller, NC Policy Watch reported.

Muller shared a statement on Twitter Monday that didn’t explicitly allege but strongly implied the decision not to reappoint him was motivated by politics. “I would hate to think it had something to do with my focusing public attention on ways in which the law has ignored and harmed the interests of African Americans—and still does,” Muller wrote. “These are matters within my expertise as a legal scholar and historian, the very stuff of the work I do as a university professor.”

“It would be an ominous sign for the values of a leading research university and of a celebrated academic press if our system’s Board of Governors were to single out faculty members for punishment for voicing their views on matters within their expertise and research,” he said.

He added in an email to VICE News that the sources NC Policy Watch spoke to “tend pretty strongly to suggest that my expression about matters of law, race and history *was* the basis of the Board’s action.” 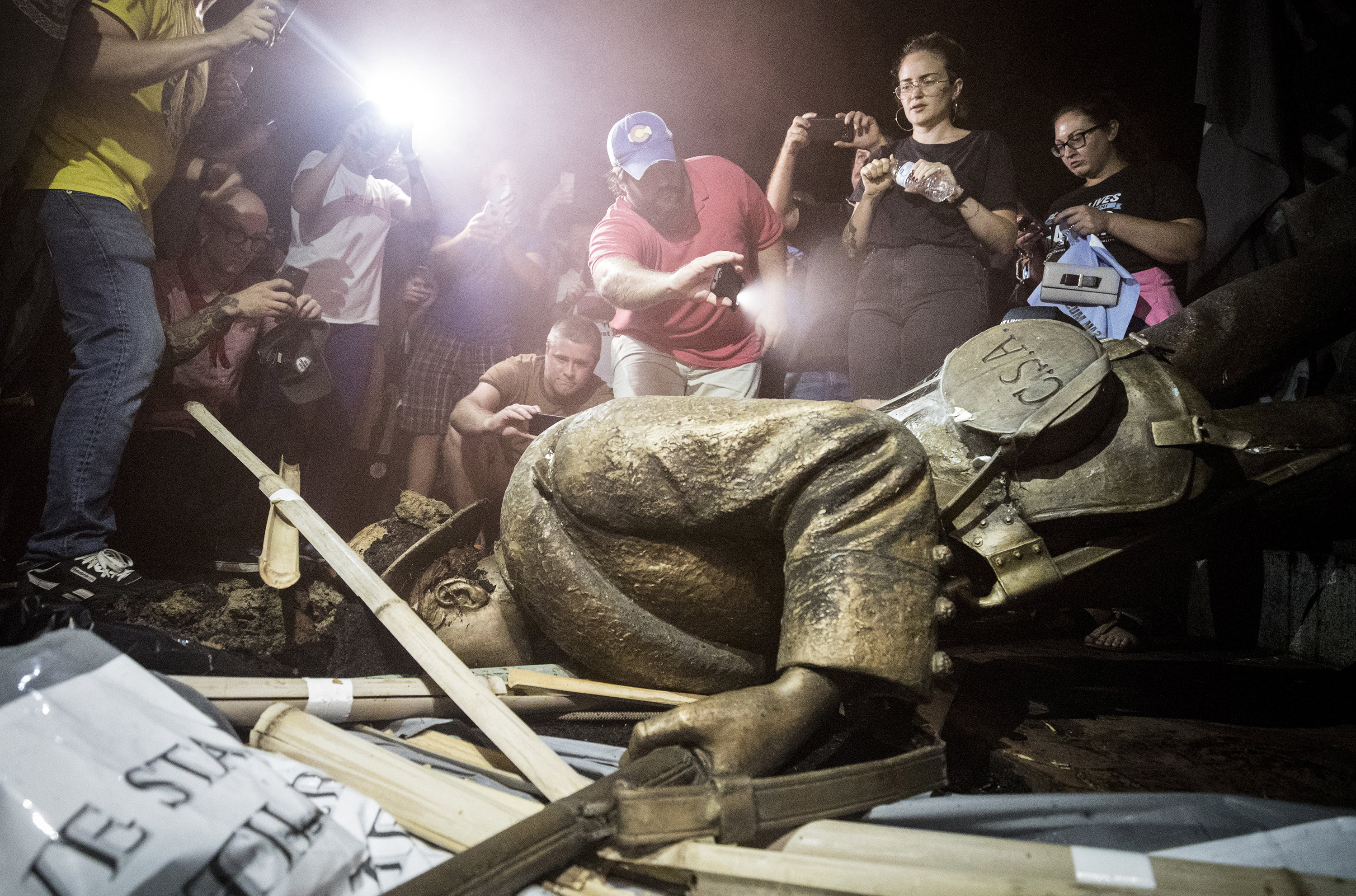 The Oil Pipeline Battle No One Is Talking About