When Aaron Appelhans became the sheriff of Albany County, Wyoming, he knew he had a tough job ahead of him. As a progressive, he wanted to increase accountability, transparency, and diversity among his officers in one of the most conservative—and whitest—states in the country.

He’s also the first Black person to ever take on the role in the state’s 131-year history.

“I want to try and get to that level where we’re that stereotypical western sheriff in those old movies, where the sheriff walks up and everyone’s like, ‘Morning, sheriff!” Appelhans, who moved to the county 20 years ago from his hometown of Westminster, Colorado, told VICE News. “I know that’s an unrealistic goal because we’re always going to have to deal with certain things, but I really want to get to a point where everything’s good, we’re maintaining peace.”

So far, the 40-year-old sheriff has lived up to many of his promises. Since being appointed by a county commission in December 2020 after his predecessor retired, Appelhans has hired five new female and three non-white deputies into the ranks of his 35-person agency, reformed how the county interacts with mentally ill residents in crisis, and created a no-tolerance policy for dishonesty and misconduct among officers.

But the job hasn’t come without its challenges. Appelhans became sheriff just a couple of years after a county deputy’s fatal shooting of Robbie Ramirez, an unarmed man living with mental illness, which resulted in widespread protests and a federal lawsuit. And in general, criminal justice reforms like the ones Appelhans wants are less popular with conservatives and white Americans.

Being the first of his kind with so much authority has made Appelhans a target for racism as well: In his first few months in office, a state representative posted a racist meme on Twitter comparing Appelhans to the Black sheriff from the iconic movie “Blazing Saddles.”

It wasn’t an isolated occurrence.

“I’ve been Black a lot longer than I’ve been a cop,” Appelhans said. “So unfortunately, this isn’t my first go-around with people making racist remarks or trying to comment on my character based on how I look or how I talk. But as unfortunate as it is, it’s not unexpected.”

Nearly a year after taking office, Appelhans talked to VICE News about the challenges of being the first Black sheriff in Wyoming and the progress he’s made on his ultimate goal of creating a more inclusive and responsible police force that stays that way for years to come.

VICE NEWS: When you first became sheriff, you said you wanted to address systemic issues in policing, like de-escalation, transparency, and the recruitment and retention of more diverse officers. How have those efforts gone in your first year?

Aaron Appelhans: I think they’ve gone well. Transparency has been fairly easy, to tell you the truth. Coming in, I always wanted to make sure that I was available to the public, letting people know what we do and what we have been doing and what we can work on.

Recruiting, we’ve done a pretty decent job. We’re still a little short-staffed and have some positions we need to fill, but in terms of the way I wanted to recruit, we’ve made really large strides on it. About half of the new people that we’ve hired have all been female. We’ve been upping our numbers in terms of the different ethnicities and representation that we have among our ranks.

In the beginning, I just came out and said that’s going to be one of our more difficult challenges. But we were going to try and tackle that one head-on, and just be honest with people and say, ‘We’re looking for these underrepresented populations to come and work for us because you’re not represented, and we still work within those communities.’ And I think that’s really worked.

Why was diversifying your ranks such a big deal for your tenure as sheriff?

It was for a couple of different reasons: One, looking at it from kind of a managerial CEO standpoint. We were having a hard time recruiting people. Part of it is we weren’t reaching out to the entire population, and that’s completely inefficient. We weren’t attracting a whole lot of female officers, and that’s 50% of the population right there. It puts you behind the times if you don’t do that.

The second main reason is trying to get more people from a lot of different areas literally gives us more expertise in a lot of these fields that maybe we don’t really have a lot of good expertise or that we can’t train expertise on, especially when you get to some of these cultural situations and some of the households that we’re called to. They can take a look and say, ‘Hey, this is the reason why they say the things that they say, this is the reason why they do some of these things that they do.’

What’s the change that you’re most proud of since taking the job?

Unfortunately, a good percentage of the people that get arrested also have some underlying mental health issues or some type of substance abuse issues, sometimes both. Within our detention center, we really upped our training to better recognize what those symptoms are and get them to more referral services.

We’ve worked to get a lot of these individuals different bond requirements so that they can get referred to other services, especially on a lot of our misdemeanor cases. We’re not a hospital, we’re not a mental health facility or a detox facility. We’re a detention center. So anybody who needs those services, the detention center is not the best place for those people, and a lot of times it makes their mental health situation worse.

Is individual accountability within the department something you talk to about your officers?

Yeah. Accountability is something that I wanted to make sure we had and what those expectations are clear moving forward. We don’t let issues sit, we don’t brush things under the rug, we address it right away. And if there is a consequence with it, then we follow through on it. This is one of those major culture shifts that we’ve had since I took over.

In your first few days on the job, local officials posted a racist character in reference to you on social media. Have you experienced other examples of the town’s mostly white officials and residents pushing back against the idea of a Black sheriff?

No, it wasn’t an isolated incident. I wish it was. It’s one of those things I knew going in that I was going to have to deal with go in. I guess I tell a lot of people that I’ve been Black a lot longer than I’ve been a cop. So unfortunately, this isn’t my first go-around with people making racist remarks or trying to comment on my character based on how I look or how I talk. But as unfortunate as it is, it’s not unexpected.

How does that affect you?

It doesn’t affect my day-to-day. It’s always hard on me personally when you see those things. When you grow up from a different race, you wear it on your face. You always hope for better, especially in the era that I grew up in. I don’t want to say you become numb to it, but you get used to it. I struggle with that because you learn to expect it. I really wish it wasn’t that way, but that’s just part of the defense mechanism that you have to kind of deal with a lot of that stuff.

I’m probably going to get it again. I don’t like it. I don’t condone it. If you do a Google search, you’ll find a whole bunch of things on me: Some good, but some bad in terms of caricatures and things people draw, posters, and memes. I don’t want to say it’s part of the job. But with the unique situation of coming in and being the first, especially in the state of Wyoming, I’m going to have to deal with these things a little more publicly than other people have to.

Can you talk about your long-term goals for Albany County and for your role as sheriff there?

Some of the goals that I really had was to make those changes on the local level that put us in the role of peace officers who keep the peace. I want to try and get to that level where we’re that stereotypical western sheriff in those old movies. Where the Sheriff walks up and everyone’s like ‘Morning sheriff!” It’s always a more rotund kind of guy that doesn’t have a whole lot to do but knows everyone and hangs out at the local baseball game and things like that. I know that’s an unrealistic goal because we’re always going to have to deal with certain things, but I really want to get to a point where everything’s good, we’re maintaining peace, everyone’s nice to everybody and we’re able to handle all situations we’re called to really well.

I’m the first. So I really take it upon myself to make sure that I provide opportunities for other people who come after me. It’s my responsibility to hold that door open. I’m trying to make that as easy as it possibly can be for people who look like me to replace me. That’s really the biggest thing for me in terms of legacy is just making sure that I’m creating opportunities for other people like me. 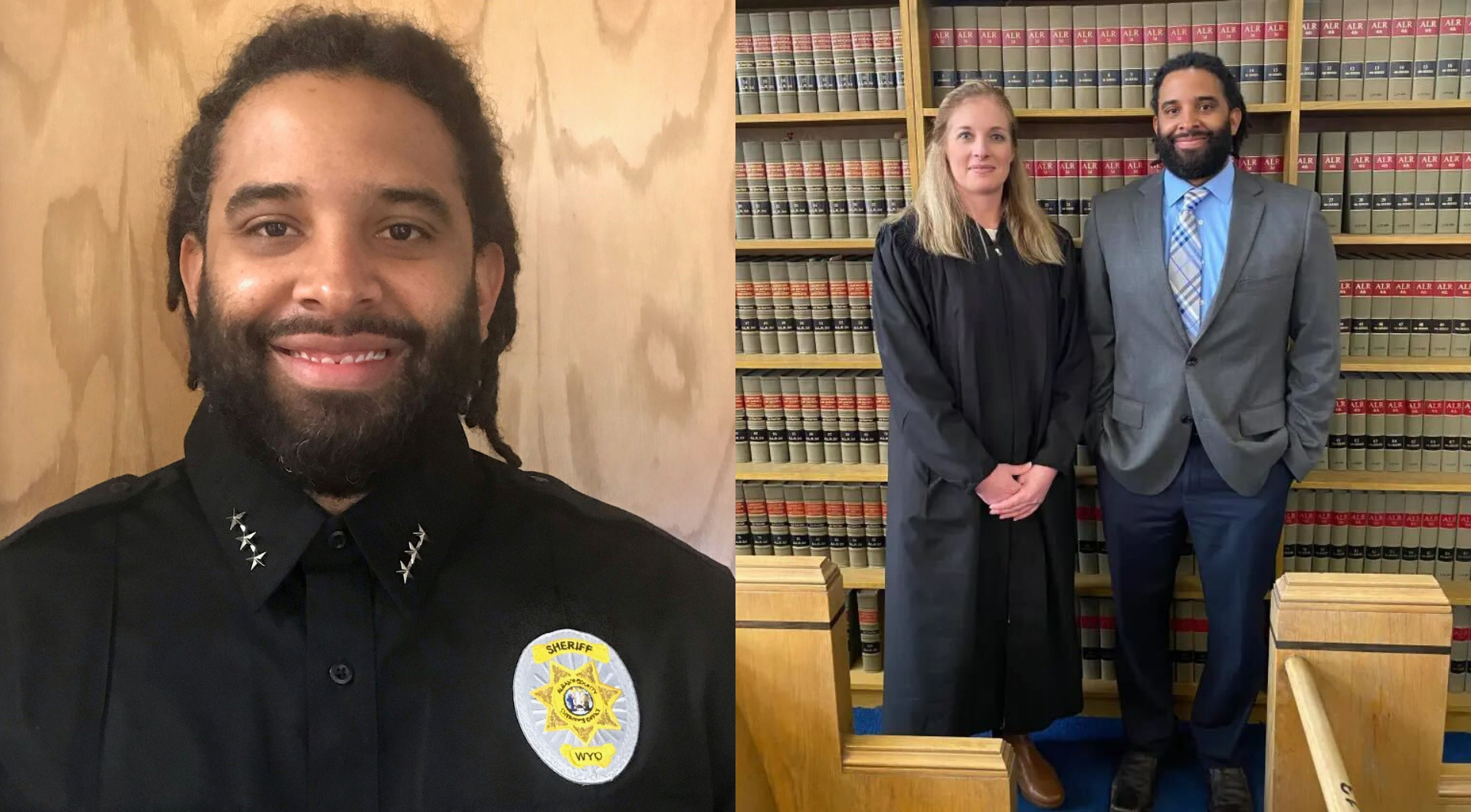 It Sure Looks Like Trump Is About to Pardon Roger Stone