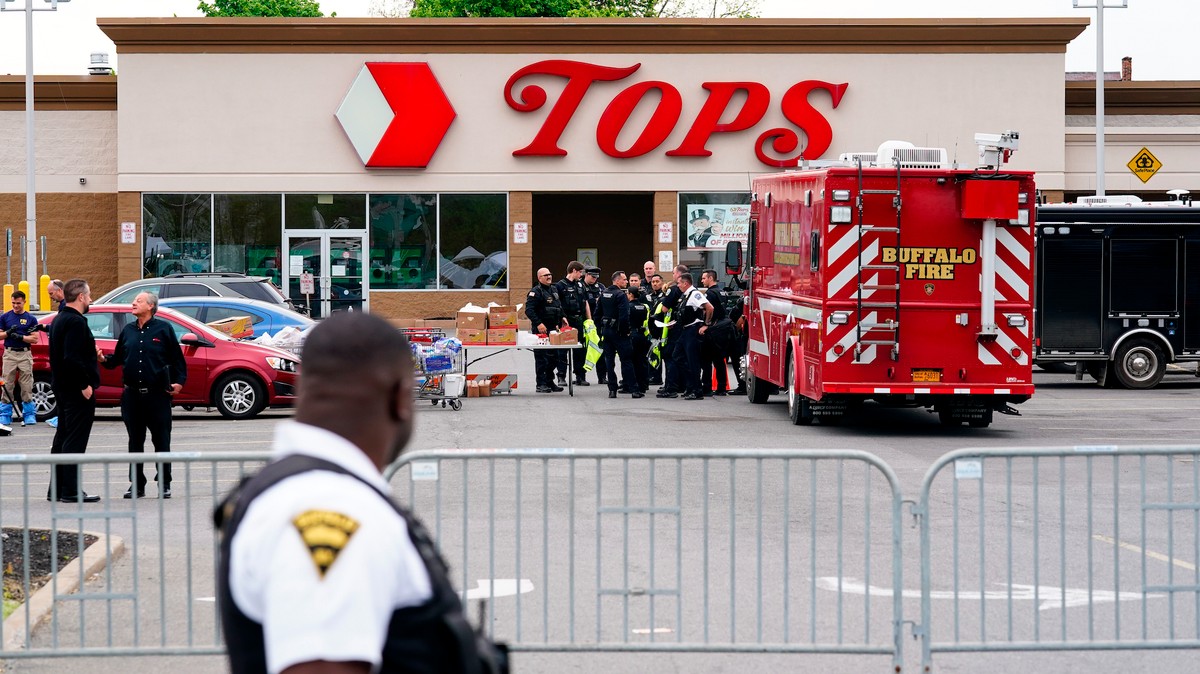 The man who allegedly shot and killed at least 10 people in Tops Friendly grocery store in Buffalo Saturday originally planned his attack for March 15, the anniversary of the Christchurch shooting, which inspired his violent actions. But he postponed his plans on six different occasions, according to an online diary he made public just hours before the mass shooting.

The diary, seemingly written for months in a private Discord server, details the planning and execution of a racially-motivated attack, driven by gunman’s conviction that a “white genocide” is being perpetrated in America. It also offers insight into the mind of an 18-year-old second-guessing his decision to ultimately commit an alleged mass murder.

The diary entries, which include his efforts scouting for locations and struggling with weapons and tactical gear, begin in November 2021. Within the first 10 messages posted on the server, the alleged shooter states: “Attack begins on March 15, 2022, 3 years after the Christchurch mass shooting.”

The Christchurch massacre and its perpetrator are mentioned throughout his chat logs as sources of inspiration for his attack. The shooter’s manifesto was itself largely inspired, and in some cases, directly stolen from the infamous diatribe the Christchurch shooter posted before killing 51 people in cold blood. The attack itself likewise mirrored the Christchurch shooting, with the man using a helmet cam so the video looks like a first person shooter video game, and streaming it online.

But despite months of planning, when March 15 came around, the accused gunman postponed the attack because ammo kept getting jammed in his assault rifle. He wrote that the attack would now take place on March 26. But that date, too, came and went. The accused attacker, once again, pushed off his plans because of issues with his firearms and  promised to carry out the attack a week later, on April 2. This time, the attack was postponed because he injured his trigger-finger testing out his guns.

He failed to go through with the attack again on April 9 and April 15, both times because he was feeling ill, symptoms he ultimately believed were the result of contracting COVID-19.

The next planned date was April 30, but that also didn’t happen due to a lack of sleep.

“Worst night of my entire life,” the alleged gunman  wrote on the morning of April 30. “Couldn’t get to sleep, then kept waking up in the middle of the night. So this is my second night in a row that I barely slept. Fuck what am I supposed to do? Is this supposed to be some kind of sign I shouldn’t do it? I keep on having problems that delay and delay.”

The idea that maybe he should not go ahead with the attack was not a new one for the alleged shooter. “I doubt my abilities everyday. I doubt myself many times a day about my ability to carry on this attack,” he wrote in December.

Along with doubt, another major theme in the diary was suicide. This again was unsurprising given that in May 2021 he was allegedly hospitalized for a mental health assessment after he wrote “murder/suicide” on a economics school project about what he wanted to do after he retired.

That instance should have triggered New York State’s “red flag” law, which would have prevented him from purchasing the AR-style Bushmaster rifle he used, but it’s not clear if anyone reported him. “Obviously not,” he even wrote at one point in his diary.

Tellingly, the accused shooter believed more should have been done to help him that day.

“Perhaps [writing “murder/suicide] was a cry of help from me, I’m not actually sure, I wrote it down because it was the first thing that came to mind, and I didn’t think of the consequences,” he wrote in his diary in January 2022. In late January, as he was in the middle of planning his attack, the teenager claimed the real reason for setting up the server was to be a “suicide discord.”

Throughout the document, he repeatedly talks about having suicidal thoughts and writes that the only reason he didn’t act on them was because he believed his attack would have a greater impact. But doesn’t dwell too long on the subject of mental health in the diary before returning to his favored topics of antisemitism, racism, or guns.

After shooting 13 people at the Tops Friendly Supermarket on Saturday—11 of whom were Black—he walked outside to face the police and briefly placed his assault rifle under his chin, as if he was about to take his own life, before putting it down, and surrendering.

One of the most disturbing aspects the diary showcases is the accused killer’s thought process in deciding where to commit his massacre. He scouted out multiple locations but struggled to decide on one. He wrote about how he was uncomfortable killing people in a place of worship but would do it because past mass shooters, like the white supremacist who killed nine in a Charleston church in 2015, did.

The alleged Buffalo gunman also worried about going to a location where there would be more white people than Black people, which was a consistent factor in his reasoning. He ruminated about going to a predominately Black school and killing children but said he was “iffy” on the idea.

In February, after months of planning, he decided on the Tops grocery store, because the area had a high Black population and many wouldn’t suspect the spot, according to the diary. The store was only supposed to be the start point: He was hoping to travel to a small nearby restaurant, and lastly make his way to a barbershop. In March, he began to scout the location in person.

As time went on, the killer became more meticulous in his planning. He documented several trips to the location, in which he took photos and sketched out the parking lot setups. While there, he took note of how many people of each race appeared at the locations.

Several times while scouting a location to commit the heinous crimes, the shooter had run-ins with authorities. On March 8, he was pulled over for speeding on his way to the grocery store, but nothing came of the speeding ticket. He did not indicate if he had any weapons or gear with him at the time.

“I gotta remember on the actual attack date I have to go the speed limit and try to prevent getting pulled over by an officer,” he wrote in the diary.

But the speeding ticket surfaced again in late March when his father received a notice in the mail and asked his son why he was so far away from home when he was meant to be in school (he was enrolled in State University of New York (SUNY) Broome Community College where he says he was studying engineering, but he repeatedly wrote about skipping classes to plan his attack or write his screed). The accused gunman claimed he took the day off to go hiking, which appeared to appease his father.

The alleged killer wrote that he was actually stopped by a Black security guard during one of his scouting trips to Buffalo, where he went into the Tops three times. He said the security guard asked him what he was doing and the killer lied by saying he was collecting census data.

“In hindsight that was a close call,” he wrote.

On Saturday, one of those killed inside the Tops Friendly Supermarket was Pearl Young, one of the store’s Black security guards. Other victims include Ruth Whitfield, an 88-year old mother killed while going to get something to eat; Katherine ‘Kat’ Massey, a 72-year-old civil rights advocate; Heyward Patterson, a 67-year-old deacon at a nearby church; and, Aaron Salter, a 55-year-old retired police officer.

The alleged gunman also wrote about self-funding the attack by selling his own items, including clothes and silver coins that he had invested in. He also attempted to sell shares he owned in Disney, but couldn’t remember his password so wasn’t able to access the funds.

The teenager documents buying a lot of tactical gear online, including armor plated combat gear, helmets, gloves, and socks. He also bought a GoPro camera to livestream the attack.

The entire cost of his guns, gear, and incidental items like gas, cames to over $10,000, according to an analysis by security researcher and president of Insight Threat Intelligence, Jess Davis.

Davis said concluded that the shooting was one of the most expensive ever conducted by a lone actor and that “ financial constraints likely reduced the lethality of the attack.” The alleged shooter’s own comments in his diary back that up— he claimed he ran out of money as the day of the massacre drew near.

“I can’t buy my own groceries cause again, I don’t have the money to,” he wrote in May 2022. “I have no more money left for anything except gas.” 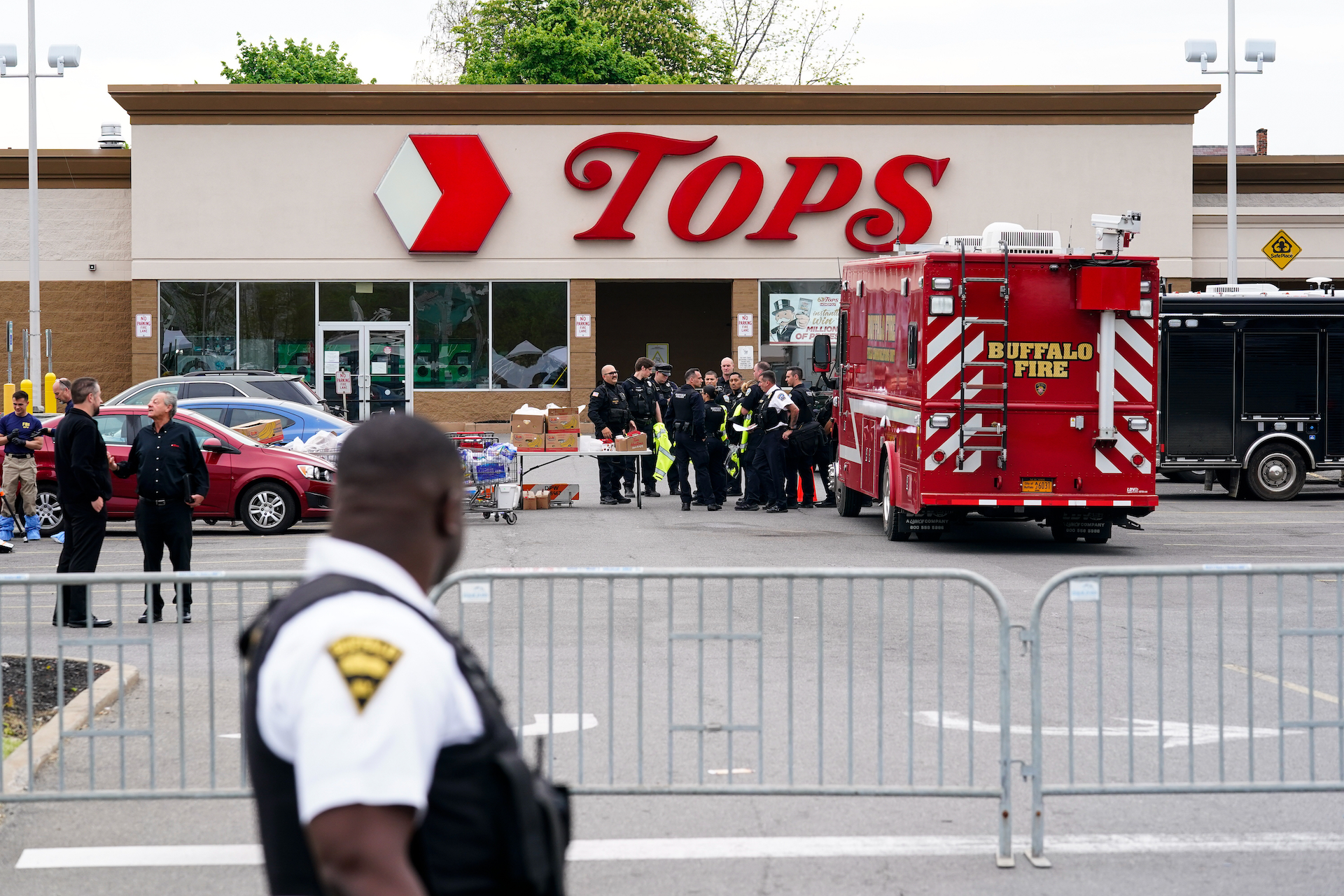