After six days, 150 people are still missing from a 12-story residential building that collapsed near Miami last week—and officials have yet to land on a cause for the tragedy.

The building in Surfside, Florida, collapsed at around 1:30 a.m. on June 24, seemingly out of nowhere. So far, 11 residents have been confirmed dead. Video of the disaster shows the building standing one moment, and then violently buckling the next, sending a massive cloud of smoke into the air with small flashes of light inside the cloud. There’s a moment of calm, before the remainder of one side of the building crumbles.

During a press conference Tuesday, officials said they can’t name a specific reason the building collapsed but cited “structural issues.”

The building had been deteriorating for years, according to the Miami Herald. In fact, the president of the condo building, Jean Wodnicki, told residents in April that the building needed major repairs—and a 2018 audit of the building showed signs of significant deterioration, multiple outlets reported.

The mayor of Miami-Dade County, Daniella Levine Cava, said that she’s assembling a task force to audit other buildings in the area that aren’t up to code. Since the Surfside building collapsed last week, another building in the county had four balconies “immediately closed” because they were unsafe for residents, according to the mayor.

“I know within a matter of days or short weeks we will have addressed all of those safety concerns,” Cava said of other potentially dangerous buildings during the press conference.

Since the building collapsed last Thursday, workers have cleared mountains of rubble, wire, and debris in a painstaking process at times hindered by weather conditions. Authorities say that 135 people have been accounted for, but 150 are still missing. To identify victims, officials have been using DNA tests from family members and matching them to the deceased. The search is extremely meticulous, as search and rescue teams need to carefully navigate a debris field that caught on fire in certain areas since the building collapsed.

“Every time there’s an action, there’s a reaction,” Miami-Dade Assistant Fire Chief Raide Jadallah said in a news conference Monday. “It’s not an issue of ‘We could just attach a couple of cords to a concrete boulder and lift it and call it a day.’ We’re digging through, again, rubbles of concrete the size of basketballs, the size of baseballs.”

At one point during the search Monday night, debris started falling, causing officials to close off an area of the rubble pile, they said Tuesday. It will remain closed for the time being, and rescue workers are now entering the rubble from other directions to look for small pockets to keep digging in. They’ve also said there are portions where workers have dug so deep that they can finally see the building’s parking lot.

U.S. Energy Secretary Jennifer Granholm suggested in an interview with CNN on Tuesday that the climate crisis could have played a role in the condo collapse.

“Obviously, we don’t know fully, but we do know that the seas are rising. We know that we’re losing inches and inches of beaches, not just in Florida but all around,” Granholm said.

Some climate experts have also said that climate change could have played a role in the building’s collapse, though it wouldn’t be the only cause. The catastrophe raises concerns about coastal cities around the globe as the climate crisis continues to worsen.

Miami Beach has announced it will cancel this year’s Fourth of July fireworks display to “show respect” to victims of the building collapse, the Miami Herald reported. President Biden is expected to visit the site on Thursday, Florida officials said in a press conference Tuesday. In addition, the federal government has issued FEMA aid h to help in recovery efforts.  The Red Cross has also deployed aid workers to the catastrophe site, and is providing mental health crisis professionals.

Relief workers from Israel and Mexico recently joined the rescue efforts, as the Miami area is home to both Jewish and Latin American diasporas, according to Florida officials. 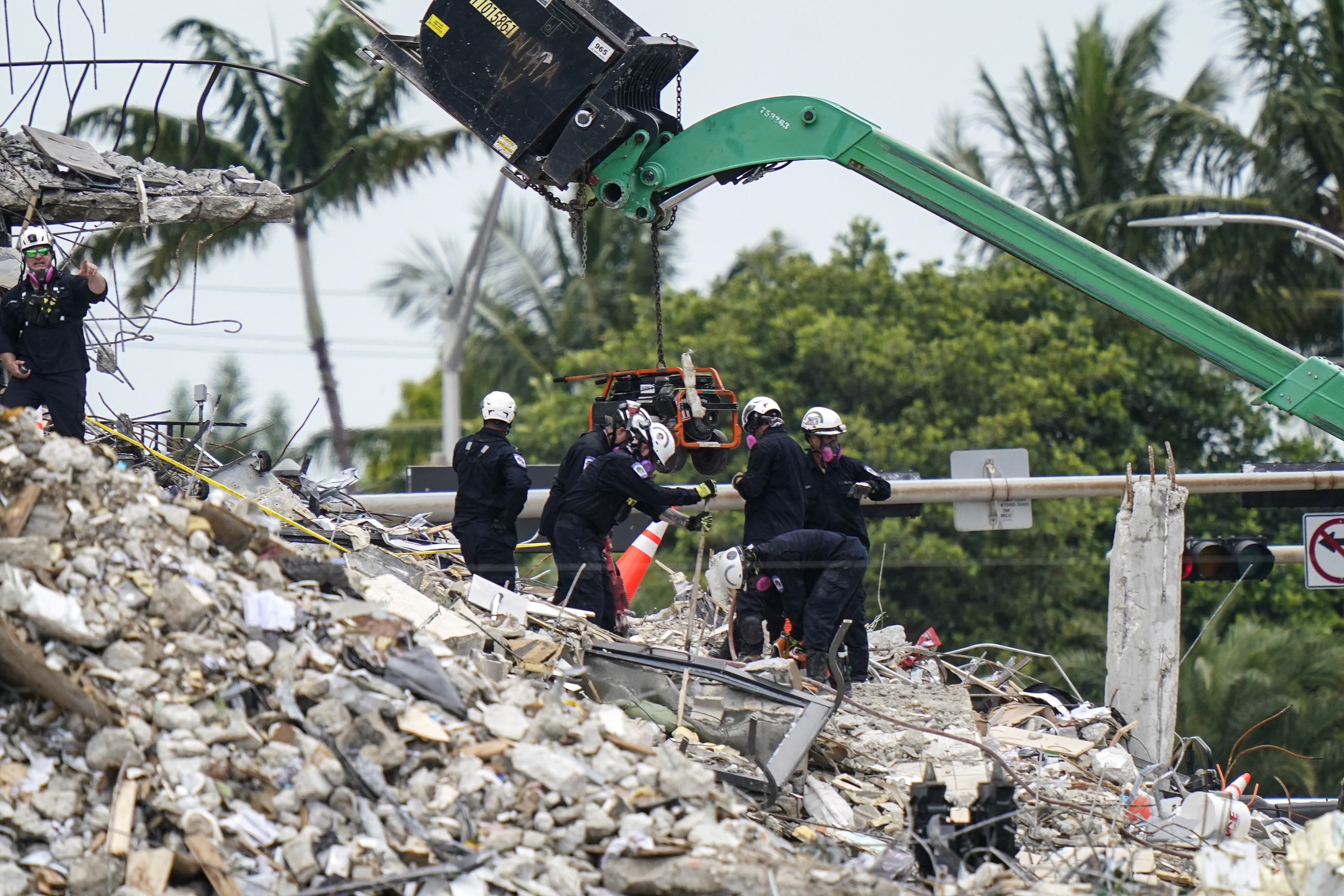